I am the product of a private, 12 year Catholic education generously made possible by my aunt who was a former elementary school teacher in Cuba. When I started school, I spoke only Spanish and found no sympathy or consolation from my teachers in this English-only setting. This was par for the course on the path to the resilience that would guide my development.

Fortunately, I wasn’t alone, as several other students in the 1960’s in Miami were from Cuban refugee families, so we struggled, survived, and even succeeded together. After high school and college graduation, I moved to California where I attended law school and practiced law for almost 20 years before being called to Christian community development ministry in 1999. In those intervening years, my husband Jim and I had two daughters, who attended public schools in a wealthy Orange County school district. Both our daughters did very well in school, we were involved as parent volunteers throughout their twelve years and they both graduated from Biola University.

My background and then my calling to ministry led me to appreciate and come to deeply understand the wide disparity of educational opportunities for students who live in low income communities. As the former CEO of KidWorks Community Development Corporation, located in Santa Ana, CA – a city that was named #1 on the hardship index by the Rockefeller Institute of Government in 2004 – I saw this reality and the need to intentionally and collectively work alongside the community to change the status quo. It was shocking to learn that almost 57% of the adult population in Santa Ana did not have a high school education. What started as a drop-in after school program, soon developed into a licensed preschool, formalized tutoring and mentoring, youth development, and parent engagement programs.

Our team started connecting with the schools and school district of 58,000 students and quickly learned how disconnected most parents were from the school administration and teachers. When we talked to teachers and the administration about the lack of parent involvement, they were prone to blame the parents by saying, “we invite them but nobody shows up.” This was shocking to us as KidWorks always had a full house, over 100 parents, at our monthly parent meetings.

Together we attended numerous suspension and expulsion hearings for students who were model students at our centers and yet were considered troublemakers and “beyond hope” by their schools. It was discouraging to see how often students who grew up in gang-infested neighborhoods were labeled as “gang-affiliated.” Students who were failing in their classes were able to turn their grades around with tutoring and mentoring at our centers. In fact, the last four years, KidWorks students have had 100% high school graduation rates and 100% college enrollments.

Space doesn’t allow for a full thesis on all the lessons I learned along the way to these student’s successes. It was apparent that in addition to the intervention and prevention work at KidWorks, the need for advocacy at the local level was vital. In partnership and collaboration with other community organizations, our community parents and youth have become organized and are strong advocates for quality education for all, regardless of status, income, language or other so-called barriers. We have seen tremendous improvement in the Santa Ana Unified School District, but it is still a work in progress.

Parents continue to become informed about and have taken advantage of other educational opportunities available in our communities, including charter schools, scholarships to private schools, extra-curricular offerings, and the like. Children and youth of communities with multiple hardship indicators deserve every chance they can get a hold of in order to succeed.

A commitment to achieving educational opportunities for all students, regardless of their zip code, is something we at CCDA remain committed to and why education equity is one of our three national advocacy platform issues alongside immigration and mass incarceration.

Together we remain committed and applaud the resilience of students, their families and community leaders who through their shared struggles, fuel community success. 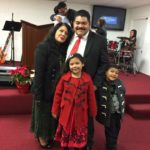 Welcome to #ccdaAdvent. In the midst of darkness, oppression, and marginalization, Christ entered [...] END_OF_DOCUMENT_TOKEN_TO_BE_REPLACED

Welcome to #ccdaAdvent. In the midst of darkness, oppression, and marginalization, Christ entered [...] END_OF_DOCUMENT_TOKEN_TO_BE_REPLACED