Reflections on a Broken System

Education is one of the most discussed topics in the U.S. today. There is a growing awareness within the general public concerning the problematic nature of our country’s public education system. Due to the failing nature of many public schools, a number of families, educational advocates, and corporate institutions have turned towards endorsing educational alternatives which seek to compensate for the existing problems within public education. Many of these entities have found it easiest to point the figure at public school teachers, citing them as the source of the problem within public schools.

Reflections on a Broken System

Education is one of the most discussed topics in the U.S. today. There is a growing awareness within the general public concerning the problematic nature of our country’s public education system. Due to the failing nature of many public schools, a number of families, educational advocates, and corporate institutions have turned towards endorsing educational alternatives which seek to compensate for the existing problems within public education. Many of these entities have found it easiest to point the figure at public school teachers, citing them as the source of the problem within public schools. While there certainly are teachers who do not live up to their responsibilities within the public school system, as is the case within any job, most teachers do the best that they can within the confines of their positions. In fact, the success rates of public school teachers cannot be extracted from the stress they feel to teach to standardized tests, because this is how their successfulness as teachers is determined. Feeling pressured to teach in this manner handcuffs teachers and condenses the breadth of the subject matters that they are allowed to cover within classes. Moreover, when teachers are forced to teach to the test, they are forced to academically prioritize the things which the established standardized test designates as the learning which students should prioritize. This becomes exceedingly problematic when standardized tests do not honor or value certain subject matters, people groups, and lived experiences, because if they are not valued by the standardized tests, when teachers are forced to teach to the test, they get left out of the curriculum and the lesson plans that are constructed for student learning.

Therefore, in the midst of the prevailing discussion around impediments to accessing quality education, one of the most pervasive, yet least talked about hindrances to gaining a quality education within the U.S. is a problem that transcends the public, private, charter, and home school divide. It is a problem that exists within the curriculum itself and the way in which information must be taught in light of the increased emphasis on standardized testing. Since standardized testing is used as the primary evaluative tool for measuring academic learning and success, teachers are going to teach to the test for purposes of job security. Thus, this is an institutional injustice, one which belittles the experiences and contributions of some, while privileging the existence and achievements of others. This problem manifests itself most clearly in history classes across the country on a daily basis. This manifestation of institutionalized injustice is both curricular and psychological in nature, and it is a hindrance which students are forced to grapple with daily.

In history class, students are given a designated curriculum that is both preselected and approved by school boards and legislative leaders across the country. These leaders make critical decisions about which books will get passed down to students as curriculum and in turn what information is both included and excluded from our country’s history textbooks. Within history classes, students are told that they are learning U.S. History, a history which is charged with the responsibility of reflecting this country’s historical contributors and population demographics in a holistic manner (as best and as realistically as can be done within a given semester). Students are told in classes that they are learning about the people who helped build this country and who helped make it into the prosperous nation that it is today. They are taught in-depth about whom these people were and the contributions they’ve made to our nation.

Therefore, there are two problems inherent to the existing structure of educating students. The first is the institutional problem, within these classes, students learn history from a curriculum which essentially focuses exclusively on the good characteristics and aspects of our country’s history. They receive a romanticized version of U.S. history which disproportionately highlights the positive aspects of this country’s history, which in turn fosters pride within our students as U.S. citizens. This is a good thing and undoubtedly should be a core aspect of what is taught within history classes throughout the land. Students and American citizens should take pride in a number of privileges that we are entitled to as U.S. citizens. However, teaching history in this manner is also very problematic because the reality is that not everyone within this country has always been entitled to these privileges and not all aspects of this country’s history are positive.

This brings into play the second issue, which is the fact for many students the history presented on a daily basis, depicted as representative of this country, and its key contributors, does not reflect or include the historical contributions of people who look like them or come from the communities in which they derive from and reside within. These people and communities have all made essential contributions to our current U.S cultural landscape. Not teaching this strips these students, particularly students of color and women, of their opportunity to have history engender pride within them concerning their racial, ethnic, and gendered creational distinctions. Moreover, teaching history in this manner subconsciously suggests to students that the disproportionally white, male, middle to upper class, history that is being taught, is real U.S. history. And that histories and courses which focus on the experiences and contributions of others outside of this normative metanarrative, are either lesser histories, accounts which are anti-American in nature, or are learnings that are only important to those specific groups being detailed within them. While this history, the normative metanarrative of “U.S. History” being taught within classes around the country today, is a history that is for everyone, one that all students much know in detail.

A recent law passed in Arizona banned ethnic studies programs in the state (video). Similarly, the states of Texas and Tennessee are currently in the midst of discussions to remove aspects of U.S. History from textbooks which some have labeled as liberal agendas. Things such as taking the words “slavery” and “imperialism” out of students textbooks and replacing them with less “offensive” or “politically charged” words within student history curriculum. While it is easier to avoid talking about the troublesome nature of aspects of our histories past, it is unethical and irresponsible. Moreover, it is not right or fair to label those who think it important to teach and have students learn a holistic version of U.S. History, one that acknowledges the good and the bad, as anti-American. Furthermore, it is not a proper Christian response to idly sit back as the image of God inherent within these populations that are getting overlooked on a daily basis, to be defaced by this institutional injustice. Our current curriculum neglects and ignores the contributions of women and people of color, deeming these populations historical irrelevant and invisible. This has a profound impact on how these groups are socially perceived and treated today. The Church must become an educational advocate, a voice of accountability to a system which distorts history and marginalizes people through its curriculum and academic assessments. 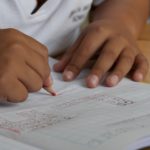 Welcome to #ccdaAdvent. In the midst of darkness, oppression, and marginalization, Christ entered [...] END_OF_DOCUMENT_TOKEN_TO_BE_REPLACED

By Jerilyn Sanders Devotional What’s the difference between waiting on God and just being [...] END_OF_DOCUMENT_TOKEN_TO_BE_REPLACED