Bethany Anderson: Why I am doing El Camino

In 2013, I had the opportunity to participate in a public display of solidarity with my immigrant brothers and sisters on the lawn of Congress in Washington DC through the Fast 4 Families. I was almost a decade into my journey of understanding our broken immigration system in the context of the predominately Mexican neighborhood in Orange County that became my home.

I was tired of my neighbors being deported, living in fear, and being taken advantage of. I was also tired of countless meetings with congressman that seemed to go nowhere. I felt hopeless in light of their inaction to pass comprehensive immigration reform, despite widespread bi-partisan support and felt like I was running low on encouragement for my neighbors. There was nothing left for me to do in the fight but lament, fast, and seek His hope. So I booked a ticket and a couple days later I was in the middle of a snowstorm in Washington DC. It was a pilgrimage of sorts, and although it didn’t change anything systemically, it changed me.

Now, in 2016, those same feelings of despair and hopelessness are creeping back in. Our political climate is discouraging, scary even; and no matter what happens in November, immigration reform seems even further out of reach than it did in 2013. Yet there are still millions of hard working people here, living in fear but still contributing to the greatness of our country. The rhetoric towards immigrants has been harsh, inflammatory, and very often untrue. It is the Church’s responsibility to know truth and care for the marginalized. We have an opportunity, more important than any other in my lifetime, to influence the trajectory or our country and properly represent Jesus, not only to the immigrant community, but to the world.

This is why I am joining El Camino, along with my co laborers in the Kingdom from Solidarity. We take seriously the call to love and welcome the stranger. We see this as an opportunity to align our hearts with God’s heart, and stand in the gap for communities who are suffering at the hand of an unjust immigration system.

Every great justice movement has a walk.

Bethany has spent the last 11 years living and learning in a small immigrant neighborhood with a community of believers and nonprofit organization called Solidarity. She currently serves as the Immigration Initiative Director for Solidarity, as well as wife and mom to her husband and kids.

Tired, But We Will Get On Our Way 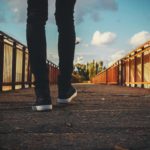 This post is part of our Civic Engagement Series for August Recess. Faith & Community [...] END_OF_DOCUMENT_TOKEN_TO_BE_REPLACED

“How sweet it is when we can gather together! It is like oil, running down Aaron’s beard…” (Psalm [...] END_OF_DOCUMENT_TOKEN_TO_BE_REPLACED