In Memory of Richard Twiss

As most of you know by now, our dear brother Richard Twiss left this life after suffering a massive heart attack while attending the National Prayer Breakfast in Washington, DC on February 6th.  A memory I will forever treasure is the opportunity I had to pray for Richard, his wife Katherine, and family and friends over the phone just hours before he went to be with the Lord later that weekend.One of my regrets in life is that I did not become friends with Richard Twiss sooner.  Sure, I had run into him at conferences, but I had never spent any meaningful time getting to know him until the last few years.  At first, he was intimidating, with his huge frame, amazing oratory skills and very quick wit. That all changed when I had a conversation with Richard about his interest in serving on the board of CCDA.  I knew we wanted to have a Native American voice and leader in our leadership and very quickly, our hearts were knitted together as brothers – as hermanos.  I realized quickly that our board would never be the same, now that this articulate, fun, visionary and prophetic bother was connected to the CCDA family.Soon after his agreeing to join our board, I traveled to Portland and had the privilege of staying with Richard and Katherine.  We had a few long conversations about family, past ministry experiences, Cowboy theology, and about his recent involvement in the NAYA Family Center in Portland.  Richard shared his burden to plug in deeply in the Native community of Portland, especially through the NAYA Family Center, where he served as a board member.  The more I got to see and hear Richard’s heart for the struggles of his community, the more excited I felt about the impact he could have on CCDA.Very quickly I became convinced that Richard should be a keynote speaker at our Chicago National Conference, but I never imagined the impact his presence, life and message would have on our movement.  That night, we learned about ‘Indian Time’ (a little like Latino Time), and at the end of his presentation, I was absolutely struck by the fact that in our 23 year history we had never had a Native leader address our convention.  It was shocking and all I could do was offer a public apology for that oversight while I embraced our amazing brother.As I reflected on that experience, I was most amazed by Richard’s persistent grace that sought to help liberate the Good News of Creator God from the captivity of a dominant Western theological framework, to a desperately needed paradigm that affirms the dignity of every cultural group created in the image of God, especially those on the margins of society.  Also, Richard’s rejection of a myopic religiosity was so refreshing, and at the same time, very threatening to many of us who never considered the shortcomings of our limited point of view, absent of a deep Native American Christian spirituality.  For this, I will miss my brother’s mentoring in the days to come.This weekend, Richard, Leroy Barber and I were scheduled to speak at the Justice Conference. His voice will be sorely missed during our upcoming session, and in all of Christendom for years to come.I would like to close with three invitations:

We praise God for the life and legacy of our friend, Richard Twiss.Noel Castellanos 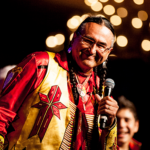 The Passing of Richard Leo Twiss

Welcome to #ccdaAdvent. In the midst of darkness, oppression, and marginalization, Christ entered [...] END_OF_DOCUMENT_TOKEN_TO_BE_REPLACED